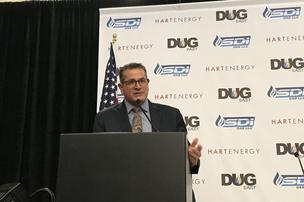 “We are thrilled to add Tim to the Olympus team at such an important time in our company’s history,” said M. Chris Doyle, Olympus President and CEO. “Tim’s long-standing leadership and operational expertise within Appalachia will be instrumental to both the successful development of our assets and our continued positive engagement with our local communities.”

Mr. Dugan joins Olympus after serving as Executive Vice President and Chief Operating Officer for CNX Resources Corporation. Prior to CNX, Mr. Dugan was Vice President of the Appalachia South Business Unit for Chesapeake Energy. He began his oil and gas career with Cabot Oil and Gas Corporation and later worked at EQT in positions of increasing responsibility. He is a 1983 graduate of the University of Pittsburgh where he received a degree in Chemical Engineering with a Petroleum Option.

“I am excited to take this next step in my career with Olympus and join this growing and dynamic energy company,” said Mr. Dugan. “Olympus is positioning itself to be a powerhouse in Appalachia, and I look forward to becoming a part of its success.”

Olympus Energy LLC (“Olympus”) is a privately-held energy company headquartered in Canonsburg that specializes in upstream and midstream development of natural gas resources in the Appalachian Basin. Olympus has a scalable asset base in southwestern Pennsylvania, having assembled over 100,000 largely contiguous and operated acres within the core Marcellus, Utica, and Upper Devonian fairways. Visit www.olympusenergy.com for additional information.