By In Homepage, News 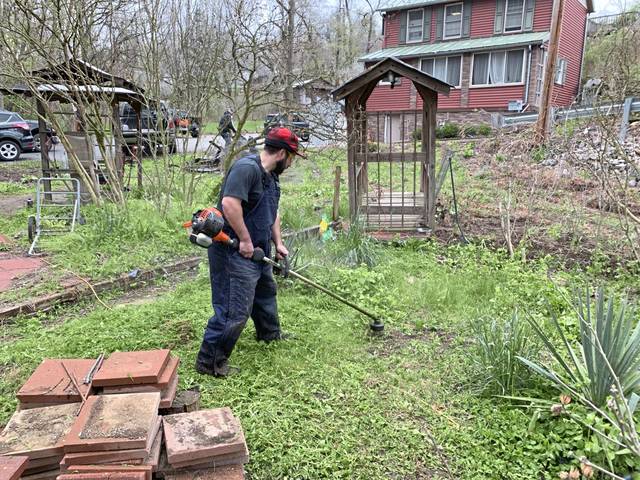 Donna Kane knew she and her husband, Dan, needed help. The Plum senior couple was still recovering from the July 2019 storms that flooded many parts of Allegheny County.

“My husband has a bad back, and because of that flood almost two years ago, my yard was kind of messed up,” said Donna Kane, who is in her 60s.

So when the borough decided to expand its annual Cleanup Day, April 24 in observance of Earth Day, to a whole week of volunteer opportunities leading up to the main event, the Kanes were happy to sign up.

“It lightened the mood,” she said. “It took a lot of weight off of us trying to get the yard cleaned up and looking good. I appreciate the borough wanting to do that.”

Several members of Olympus Energy, a natural gas company that has a well drilling pad in the borough, went to the Kanes’ Short Street home near Boyce Park to do some much-needed landscaping.

“It’s something that I’m passionate about, being able to help elderly or those in need,” said Manny Johnson, the company’s vice president of operations. “It’s part of our core values at Olympus. (We’re) blessed to have the ability to help, especially in an area where we’re operating in.”

It snowed lightly as the team cleaned up debris, stacked firewood, weeded, trimmed trees and shrubs. The team had the Kanes’ property looking better than it has in quite some time.

“With as cold as it was and it was snowing, I didn’t think they would do anything. But they came and they worked their butts off,” Donna Kane said. “They were very courteous, respectful and helpful. The yard was cleaned up really nice. I’d say they did pretty darn good.”

Olympus volunteers brought their own supplies for the effort. It was one of several organizations that helped fix up residential properties as part of the environmental preservation effort. Assistant Borough Manager Dave Soboslay said about five seniors requested assistance for various projects.

“We had more people who signed up to help seniors than seniors who needed helped,” Soboslay said. “Hopefully, next year we can expand on that.”

Olympus communications director Kimberly Price said about 20 employees participated in the major cleanup. They were on Coxcomb Hill and Kerr roads. It was the company’s third year participating.

“At the end of the day, we work in Plum,” Price said. “We have employees in Plum every day. Those are our neighbors. We’ll make sure that we’re helping them out.

“If the borough can highlight the need in the community and have people those employees can help, then that’s really good for us. We want to be part of that give-back.”

More than 200 volunteers in all participated in the April 24 cleanup. Tons of trash was collected largely from the state and Allegheny County roads. It was the fifth cleanup in six years. The event was canceled last year due to the pandemic. Access the story here.